In this film, obscene language is widely discussed as an example of a phenomenon that cannot be substituted or erased, because the film’s characters mostly speak in such a language, choosing words not from classical Russian literature but from the vocabulary that they hear in their real lives: at home, at work, in the streets, and in bars and restaurants. The film director merely records this flow of everyday speech and invites the audience to look at a more common picture, to stop pretending that Russian people speak only the language of Tolstoi. This flow of non-perfect, despised, but highly common words reveals that obscene language is not a peripheral, but a central phenomenon of contemporary everyday Russian speech. From the very first moments of the film, the necessity to pretend that this language does not exist, or is out of use, dies.

In The Hope Factory, the teenagers’ obscene language clearly aims at the demolition of rules and borders built to educate and to discipline them. This is the language of total freedom, the language they use to dream about their future and to talk about love in an attainable way. These words mark time and space in which the teenagers are respectful and fulfilled people, not just lazy and useless under-age garbage as some adults in the film claim them to be. It seems that obscene language is the only accessible way to create their lives according to their own wishes and plans. To erase this language from the film, and from real life, means to mutilate the young generation and kill their dreams and futures.

Establishing the film’s narrative about teenagers’ personal experiences and the lives of her friends and crew, Nataliia Meshchaninova constructs a story about a teenage girl who desperately wants to leave N* (Norilsk), the northern city where she was born, grew up, and in which her family and friends live. The film is full of people who are constantly talking about leaving for other cities: Temriuk, Belgorod, Ekaterinburg, Omsk, Sankt-Petersburg, Moscow, and Voronezh. They dream of living in the mainland (“materik”). Their desire establishes a new imaginary land that exists only in the minds of people who live and work in the new imperial periphery: cities built on permafrost to excavate and to process natural resources.

In this film, Norilsk represents all cities that aim at supplying the post-communist imperial center with money. The huge industrial corporations rooted in Moscow organize the city N* people’s lives to attach them to the plant with good welfare, medical help, and high salaries. This attentive care comes with strings attached: common ecological disasters that damage lives, arduous working conditions at the plant, and an almost eternal winter that lasts more than nine months, three fourths of the year. Working people pay a price for comfortable lives. In every Russian city N*, the endless imperial story is the same: it is simply repeated with new geographical nuances of longitude and latitude. The film director keeps this centripetal motif straight: the periphery exists to supply the metropole. This motif is underlined by the omnipresence of the factory in the film: it appears in the city views and landscapes, and in the citizens’ minds, as the plant determines their future. The film does not show a panoramic view of this industrial monster that breathes the lives of its workers. Almost every shot, however, is filled with background images or signs of the plant: whether it is a city view or natural landscapes. The only natural view that inspires the film’s main characters and represents an inspirational place is the taiga and the slough landscape without an industrial background. The horizon is not sunny or bright: it is grey with a bit of sunshine, but the main point is that it is clear of the smoking pipes that constantly remind people about the purpose of the city’s existence: to serve this plant. 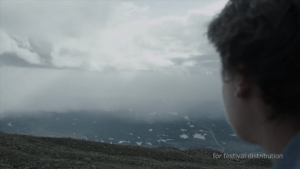 Though even with the omnipresent industrial and sovereign business plant, the people of the city N* live their lives fully and happily. The comfort that people receive with down payments from the industrial shadow, allows them to fulfill their dreams: to become a singer in a local rock-band, to work as a taxi driver for tourists, or as an illusionist in a restaurant, to cook exotic dishes for family in their spare time. These people are happy: they have both comfort and self-realization, and their future is clearly defined; they do not need to look for a job or money. They no longer remember the price they paid for this: their health, quality of life, and years of their lives. 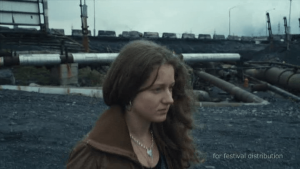 The protagonist, however, cannot fit her dreams and plans for her future into the industrial city N*. Although the main character’s parents stand in for the plant by supplying Sveta with an apartment in the city so that she can have work and live under the shadow of the smoking giant, Sveta refuses to live a comfortable life as her family does. Her desire to leave the city N* is tightly intertwined with the desire to live: she cannot bear the fact that she is not the protagonist of her own life. Thus, Sveta decides to leave the dead-frozen comfort and live her life as she wants—in Moscow. 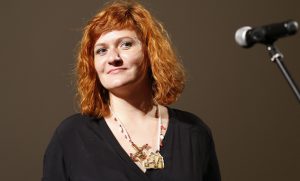 Nataliia Meshchaninova works as a TV and film director in both documentary and feature cinema. She graduated from The Kuban’ State University for Culture and Art with a major in Cinema and TV Direction in 2005. In 2007, she also finished the school of documentary cinema “Real time 2,” a workshop led by Marina Razbezhkina and Nikolai Izvolov.