Mikhail Segal’s 2006 film Franz + Polina continued a tradition of many other war films in the 2000s that revised and reconstructed memories about World War II and perceptions of the Nazis that were originally shaped by official Soviet culture and ideology. However, the increased interest in unconventional representation of the enemy and the locals’ tight interaction with them is not a new topic for cinema in the former Soviet countries. Since the Thaw (1953-1964) the national Belorussian film studio, Belarusfilm, has produced a number of films with diverse representations of the enemy. Thus, Viktor Turov’s Across the Cemetery (Cherez kladbishche, 1964) and War under the Rooftops (Voina pod kryshami, 1967) already show an ambivalent attitude toward German soldiers specifically among Belorussian women. The last film is based on the novel by a famous Belarusian writer, Ales’ Adamovich, who also collaborated with Segal on the script of Franz + Polina. 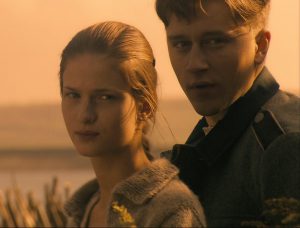 Adamovich’s 1993 novel The Deaf (Nemoi) provided the basis for the film script of Franz + Polina. The director, however, takes some liberties in interpreting the novel. This is not the first literary work by Adamovich that has been transformed into a film script for a war drama. Another novella The Khatyn’ Story (Khatynskaia povest’, 1971) became the inspiration for Elem Klimov’s famous film Come and See (Idi i smotri, 1985). Come and See and Franz + Polina, separated from each other by two decades, share many narrative and stylistic elements. Both Klimov’s and Segal’s films are made by Russian film directors, yet the focus of their films is on Belorussian people and their struggle to survive during the harsh war times. These two films draw attention to one of the most sensitive and painful topics for the country during the war—the mass incineration of Belorussian villages with all their inhabitants. At the narrative center of Come and See and Franz + Polina is a Bildungs process, with the main teenage protagonists maturing while eye-witnessing and experiencing the atrocities of the war.

In Franz + Polina, a Belorussian teenage girl, Polina, and a young German soldier, Franz, gradually develop romantic feelings for each other, while the German troops are peacefully residing in the houses of Belorussian villagers. In the first thirty minutes of the film, viewers get an opportunity to follow the everyday life of the provincial inhabitants and the melodramatic storyline of the two young people. The film opens with an optimistic scene at the riverbank, shot through a cheerful yellow lens, in which a group of naked young boys is swimming and playing in the sand by the river. The tiny figures of the young village kids are mixed with more muscular male figures (also naked) in the same shot. The upbeat, optimistic music in the background contributes to the creation of an idyll in the midst of Belorussian outskirts. However, this opening scene also reveals the director’s games with his viewers, which continue throughout the film. The naked men get dressed, and the letters “SS” and the Nazi military ID tags on their necks disclose that these are enemies. This scene creates a message that nothing is what it seems and what may seem as ideal and optimistic at first glance is the exact opposite. 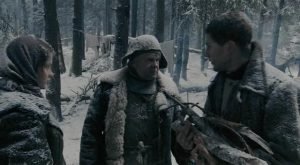 Unlike Klimov, whose film creates horrifying, sometimes very graphic images of the war, Segal chooses to use representations of the war that are less violent and offensive to viewers. However, his tricks with the audience may be considered even more harsh and cruel. He plays with color and sound to construct a somber, depressing picture of the survival in the Belorussian territories in 1943. The yellow color of the shots continues through the first “happy” part of the film, until it is revealed to the viewers that the Nazi troops have been residing peacefully in this village until orders from the top arrive to destroy it entirely.

The removal of the yellow filter signals the end of the idyll, and a grey color and undertones begin to prevail on the screen. The dissonance between the visual and aural layers of the film begins with the scene of the burning village, with extensive peaceful long-takes of burning houses and the static dark figures of the Nazis. Comforting, soft music creates discord in the audience’s perception of the scene and further emphasizes the horror of massacre. This music returns several times throughout Polina and Franz’s physically and emotionally strenuous journey and in the closing credits. Thus, Segal manages to show and intensify the horrors of World War II through his use of cinematic language.

Using cinematic and narrative techniques, the director suggests that nothing is what it seems, and ambiguity becomes a signature marker in the film. Franz has to give up his German identity and his speech in order to stay alive as Polina’s “deaf brother.” The lovemaking scene between the young characters looks more like a rape scene, accompanied by the raging barking of wild dogs. The Nazi collaborators among the locals turn out to be from the same city as Polina’s mother, but, still shoot at the young couple despite this. The Soviet commissar with anti-Semitic impulses gives unjust orders. The notions of “us” and “them” and of “Soviets” and “enemies” are all intertangled. For the rest of the film, the young lovers struggle to survive in the Belorussian forests, trying to find food and shelter, fighting wild dogs, brushing with death, and experiencing both hatred and compassion from other Belorussians. Under these extenuating circumstances, they both mature quickly and learn how to take care of each other. The ending of Segal’s film drastically differs from the one in Adamovich’s novel, and the director makes it more tragic and emotionally intense. Nevertheless, the goal of Adamovich’s novel was to create an alternative view of the war, and Segal successfully completes this task with the help of his unique cinematic language. 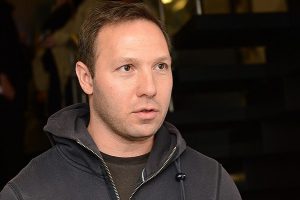 Mikhail Segal is a writer, scriptwriter, and film director. In 1994, he graduated from the Department of Film Directing at the Orel Institute of Culture. In 1995, Segal entered the program in Film Directing at the All-Union Institute of Filmmaking (VGIK). He never graduated and, instead, began to make music videos. Since 2002, he has been working in advertising. Four years after his debut film, Franz + Polina, Segal published Youth, a book with his novellas and short stories. He published another book of his prose, Short Stories, the same year that his second full-length feature film, Short Stores, came out.